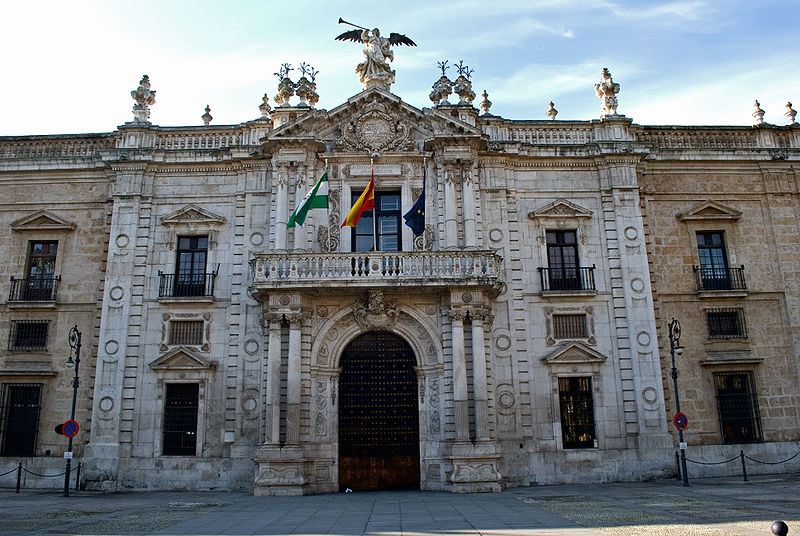 In the middle of the thirteenth century the Dominicans, in order to prepare missionaries for work among the Moors and Jews, organized schools for the teaching of Arabic, Hebrew, and Greek. To co-operate in this work and to enhance the prestige of Seville, Alfonso the Wise in 1254 established in that city "general schools" (escuelas generales) of Arabic and Latin. Alexander IV, by Bull of 21 June, 1260, recognized this foundation as a generale litterarum studium and granted its members certain dispensations in the matter of residence. Later, the cathedral chapter established ecclesiastical studies in the College of San Miguel. Rodrigo de Santaello, archdeacon of the cathedral and commonly known as Maese Rodrigo, began the construction of a building for a university in 1472; in 1502 the Catholic Majesties published the royal decree creating the university, and in 1505 Julius II granted the Bull of authorization; in 1509 the college of Maese Rodrigo was finally installed in its own building, under the name of Santa MarÌa de Jes™s, but its courses were not opened until 1516. The Catholic Majesties and the pope granted the power to confer degrees in logic, philosophy, theology, and canon and civil law. It should be noted that the colegio mayor de Maese Rodrigo and the university proper, although housed in the same building, never lost their several identities, as is shown by the fact that, in the eighteenth century, the university was moved to the College of San Hermanegildo, while that of Maese Rodrigo remained independent, although languishing.

The influence of the University of Seville, from the ecclesiastical point of view, though not equal to that of the Universities of Salamanca and of Alcal·, was nevertheless considerable. From its lecture halls came Sebasti·n Antonio de Cortés, Riquelme, Rioja, Luis Germ·n y RimbÛn, founder of the Horatian Academy, Juan S·nchez, professor of mathematics at San Telmo, MartÌn Alberto Carbajal, Cardinal Belluga, Cardinal Francisco Solis Folch, Marcelo Doye y Pelarte, Bernardo de Torrijos, Francisco Aguilar Ribon, the Abate Marchena, Alberto Lista, and many others who shone in the magistracy, or were distinguished ecclesiastics. The influence of the University of Seville on the development of the fine arts, was very great. In its shadow the school of the famous master Juan de Mablara was founded, and intellects like those of Herrera (q. v.) ArquijÛ, and many others were developed, while there were formed literary and artistic clubs, like that of Pacheco, which was a school for both painting and poetry. During the period of secularization and sequestration (1845-57) the University of Seville passed into the control of the State and received a new organization. At present it comprises the faculties of philosophy and letters, law, sciences, and medicine, with an enrolment (1910) of 1100 students.

At the same time that the royal university was established, there was developed the Universidad de Mareantes (university of sea-farers), in which body the Catholic Majesties, by a royal decree of 1503, established the Casa de ContrataciÛn with classes of pilots and of seamen, and courses in cosmography, mathematics, military tactics, and artillery. This establishment was of incalculable importance, for it was there that the expeditions to the Indies were organized, and there that the great Spanish sailors were educated. This species of polytechnic school, which, according to Eden, Bourné, and Humboldt, taught a great deal to Europe, following the fortunes of Spanish science, fell into decay in the seventeenth century.